Is Justice a Game? - The Racial Hurricane in Ferguson, Missouri 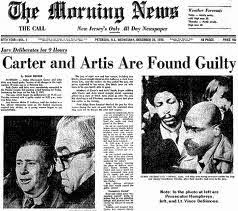 In 1967, Rubin Carter, aka, Hurricane, a successful black boxer, was convicted of killing three people at a bar in New Jersey, a bar at which he was not present on the night in question.  Hurricane was imprisoned for 19 years, always proclaiming his innocence.  His conviction was finally set aside in 1987, and he was freed.  His case was widely known as an extreme example of racial injustice and intolerance. His case was also one that revealed some of the unreliability of eyewitness testimony.  In 1975, Bob Dylan wrote a song about the Hurricane's trial and its racial implications, in the years long struggle to advocate on Hurricane Carter's behalf.  Dylan's haunting lyrics ring true today.  "To see him obviously framed...Couldn’t help but make me feel ashamed to live in a land ... Where justice is a game..." Carter passed away in April 2014, prior to the racial hurricane in Ferguson, Missouri.  However, after Ferguson, amongst other events between Carter's incarceration, freedom and death, shouldn't we still be ashamed to live in a land where justice is a game?

On August 9, 2014, Michael Brown, another black (young) man, nearly half a century later, was walking down the middle of the street in Ferguson, Missouri, with his friend, Dorian Jackson. Brown had previously stolen cigarillos from the Ferguson Market.  Officer Darren Wilson, in his Chevy Tahoe, saw Brown and Jackson walking in the middle of the street, and pulled alongside them , asking what was wrong with the sidewalk.  Jackson indicated they were almost to their destination, and depending on whether you believe Wilson or Jackson, Brown cussed at Wilson, or said nothing, respectively.  After reading a large portion of the grand jury testimony and several media interviews, this writer knows that the agreed upon facts are that Wilson then reversed his vehicle, blocked the path of Johnson and Brown, and began to engage them. Then, Brown and the officer began to have an altercation at Wilson's window. Wilson states that Brown had his hand on Wilson's gun, which Wilson had pulled to "defend" himself. At some point, Wilson's attempted to discharge his gun two times, which failed, and again, a third time, wherein a bullet discharged.  Subsequent to that, Wilson was able to exit his vehicle, as Brown and Jackson ran away.

Wilson told his Sergeant he knew nothing about the Cigarillos, when he spoke with the Sergeant at the scene and afterward in subsequent months. Wilson reported he was doing a pedestrian check, when he initially reported his contact with Brown and Jackson. At no time did he mention responding to the stealing at the Ferguson Market. However, in his Grand Jury Testimony, and in subsequent various interviews, Wilson stated he heard the stealing call, and saw Cigarillos in Brown's hand.  He later testified that he not only saw the Cigarillos, but heard/saw Brown pass off the Cigarillos to Jackson while he and Brown were fighting through his Tahoe's window.  Wilson's story, throughout the grand jury testimony read by this writer, was vouched for, credited, and bolstered by the prosecutors who were presenting the case to the grand jury, purportedly to obtain an indictment.  Any witness decrying his version of the facts was treated skeptically at best, and discredited for the most part, by the prosecutors conducting the grand jury session.

The physical evidence revealed Wilson shot his gun 12 times during his encounter with Brown, and the autopsy revealed Brown was hit with a bullet at least seven times. Wilson's gun held 13 bullets.  The autopsy revealed that Brown was shot three times in the right arm, (one of which is consistent with Brown running away from Wilson, depending on arm position while running) one time through the forehead in a downward trajectory, exiting in the right jaw, one time in the top of the head, in a downward trajectory, which lodged in the brain, and two gunshot wounds in the right chest/torso, which nicked the lungs. One of the shots that nicked his lung broke a rib, forcing the rib into the lower portion of the right lung. Either chest shot would have been debilitating and possibly fatal without immediate treatment.  The shot to the top of his head would have immediately made him unconscious and was fatal.

Wilson's grand jury testimony was, at times, unbelievable, but the most telling and concerning thing he said was that he was taught, as a police officer, to neutralize any threat.  He perceived Brown as a threat, so he was going to neutralize it.  He claimed to have assessed the triangle of force police are taught, in order to assess the amount of force he believed he could use, while he was allegedly tussling with Brown through the window of his Tahoe.  He, Darren Wilson, a 28 year old man, who was 6 foot 4 inches tall, and weighed 210 pounds, made the determination he could use deadly force, as he was allegedly fending off Brown, a 6 foot 4 inch, 292 pound eight-day-high school graduate, from the window of his Tahoe.  He claims Brown had both hands, and his upper body, in the window of the Tahoe, wildly swinging at him, and that Brown was "like a demon".   Wilson did not use his baton; he did not used his mace; he did not put his car in drive and speed forward to divest himself of Brown's wildly swinging arms to neutralize the threat.  Instead, he drew his gun, aimed it at Brown; it malfunctioned, so he took the time to fix it, and then shot at Brown. Brown then ran away. Wilson pursued him and shot 9 more times, killing Brown.  Yes, Wilson says Brown was turning around to "charge him".  Yes, Wilson says Brown had a "psychotic look".  Yes, Wilson says he was pursuing Brown to "protect the community".  However, Brown was running from him; other officers were in the area and on the way. Brown was not running toward people, assaulting them. He was not armed. He was not old enough to drink........

As this blogger stated, her perusal of the grand jury testimony is hardly complete.  A pause was taken due to the sheer amount of information and the sheer amount of patience and frustration it took this former prosecutor to sift through the interesting way in which the grand jury was provided information.  You know, when something is wrong; it's just plain wrong.  Did Michael Brown steal Cigarillos? The answer appears to be a resounding yes.  He should have been punished for that, upon due process of law, and a fair trial, with fair procedures.  Did Darren Wilson lawfully pursue Michael Brown with proper force?  The answer, to this old prosecutor, appears to be a resounding no. If the answer, under the law is truly yes, then the law is wrong.

The statutes allowing police to use force, even deadly force, in order to pursue an arrestee, are there for a reason. This blogger understands the danger police are in, and that communities are in, and appreciates those who give their time and pledge their lives in defense of those communities.  However, communities are not protected when cops think their objective is to "neutralize threats" instead of to "protect and serve" the public.  Neutralizing a threat is war speak.  The streets of hometown America cannot be, and should not be, run like a war zone.   The proverbial war on crime, or war on drugs, or whatever war is in vogue in this decade, is never won.  Perhaps, if we all tried to work and live together, rather than commit acts of war upon each other, we'd be happier, healthier, and proud to live in our society.  Isn't that a goal we should strive for in our land that was founded on individual liberties and protection from an overreaching government???   Or, is that goal just a part of the justice game?

*The opinions expressed are of the blogger only and were not intended as legal advice or as an avenue to open a lawyer-client relationship.
Posted by Megan at 5:45 PM No comments: