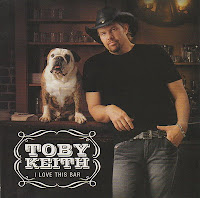 Toby Keith loves this bar, but what happens to you, after you leave the bar?  You know not to drive, as you don't want to deal with an Operating while Intoxicated, so you might call for a cab or walk home.  You are not out of the woods. The next consideration is, are you at risk for public intoxication in Indiana?  The law is tricky here, but you need to know that, despite the idea that you want to do the right thing and take the walk... Consider that you need to do to also ensure you're following the law.  College towns, in particular, like to pass out the public intox tickets to "police the streets",  but many officers forget the intricacies of the law. So, you should likely consult your friendly neighborhood lawyer.

The Indiana Courts have had to really look at the language of the public intox statute, as it's pretty broad.  In 2012, the public intox statute changed to ensure that merely being drunk in public was not a crime. This is to ensure that people are encouraged to walk or get a cab when drunk, instead of trying to hide away in their own car, potentially driving while intoxicated, a much more dangerous feat... This is just good public policy.  But, you will still get stopped for the infamous PI ticket, especially in college towns, or small towns that want to make money for their coffers. So, what do you need to know?

The State has to prove that you actually endangered yourself or another person, harassed or annoyed another person, or breached the peace.  Frequently, officers tend to forget these elements, and/or decide that you are just annoying and charge you. This simply is not the standard the Court has set forth in case law. Furthermore, you can be as annoying as you want in your own home, and it's not public intoxication, as it's not taking place in public.

Now, all of this is information that's good to know, but just a friendly neighborhood reminder -- it's not information to spout off to officers if they are giving you a ticket for public intoxication.  It's best to take your fight to Court, not to the officer while they are dealing with you in an inebriated state...  When you hire an attorney, we can do a lot more for you if you haven't tried to "teach" the officer what you know about the law.  While this should not matter, sometimes, it could.

*The opinions expressed are of the blogger only and were not intended as legal advice or as an avenue to open a lawyer-client relationship.
Posted by Megan at 5:24 PM No comments: