Mike Pence and Co. - Take if from Lesley Gore - You Don't Own Me

Normally, this blog doesn't address one particular person, but this one will. You've really done a doozy on things over the last year/year and a half. First, you make Indiana look ridiculous on a national level with your Religions Freedom Act. That was brilliant (insert sarcasm and disdain here).

Now, you are signing into law, after your brethren in state Congress thought it was a brilliant plan, an entirely unconstitutional and ridiculous bill attempting to change settled law on abortion.  Have you guys (yes, guys, white, male, religious conservatives) read Roe v. Wade (1973), and Planned Parenthood v. Casey (1992)?  A. Our nation was founded on separation of church and state, which you guys keep forgetting, which means, you have your religious thoughts and I have mine, but the law is separate... B. The Supreme Court, you know, the one in Washington D.C., with the pillars and all, they even said, as long as the baby is not viable, a woman's right to privacy, under the US Constitution, as provided to the states through the 14th Amendment, is paramount.  This gives the woman (whose body and health is affected here, let's be real) the right to choose, period. The fight has been lost, gentleman (the term being used loosely here).

Whether people out there in the blogosphere are pro-choice or pro-life, which are monikers to which this blogger does not subscribe, people ought to all be pro-health, pro-good-decisionmaking, and pro-constitutional rights. These should be consensus points.  The new law you've signed now requires a woman and her family, should she be in a committed relationship when pregnant, to either lie to her doctor about reasons for abortion, decide not to obtain information regarding the health and welfare of her child, or to force a woman to give birth to a child who may never be able to survive after birth. Any of these situations is untenable, and in complete violations of a woman's right to privacy, and of any family's right to privacy, should the family be making the decision about pregnancy termination.  No matter how you slice it, no one should be forced to go through a full term pregnancy, only to be required to secure postnatal hospice care for their newborn because you, sir, and your buddies, have decided you know more about the woman's choices, or the family's choices, than those directly involved.

It's unreal to this blogger that Lesley Gore, in 1963, the Supreme Court in 1973, and  again in 1992, got it, YOU DON'T OWN ME.  Women are independent beings.  People are independent beings. They are not props and toys for you to make decisions for, Mr. Pence. Shame on you for forcing your religious beliefs on a whole population.

For those, besides Mr. Pence, who've read my rant, thanks for your eyes.  For those who are mad at me, thanks for your anger.  I'm just glad I'm still allowed my opinions. I'm terrified you, Mr. Pence, will try to mess with the First Amendment next...  You've tried it with religion and privacy... I don't think it's a stretch.

*This blog was written prior to any attempt by current state governmental authorities to repeal of the Indiana Constitutional Rights under Article One, Section 9, and the U.S. Constitution's First Amendment Rights to Free Speech (via the Fourteenth Amendment) as well as prior to attempts to repeal provisions for protection from ex post facto laws found in the US Constitution.  The opinions are of the blogger alone and are not legal advice.
Posted by Megan at 7:46 PM No comments:

Baby Got Back - Not Appropriate for the Workplace 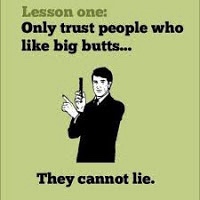 While we may all giggle at Sir Mix-A-Lot's lyrics, it's fair to say your workplace should neither sound like nor have the atmosphere of his song, Baby Got Back.  What may be funny in a song is neither kosher nor acceptable in the workplace.  If you've got a workplace that has more than 15 employees, you are exposed to  liability under Title VII of the Civil Rights Act, which protects against Harassment based upon a protected class, including race, gender, ethnic group, nationality, and age.  There are several outfits that provide training for sexual harassment, and the law firm this blogger works for is one of them. We see a lot of great workplaces fall prey to just not knowing the rules and getting into trouble because of it.  So, we decided we would offer training to employers on harassment cases, including sexual harassment, other types of harassment, and disability harassment.

The law treats these types of harassment in a similar manner, but this post will focus on sexual harassment.  Because it is typically federal law, we have to look at law from several jurisdictions.  Mainly, though, in Indiana, the Seventh Circuit law will be the most applicable.  The main thing one can say about federal law in the Seventh Circuit is, the range of conduct that IS AND IS NOT determined to be found sexual harassment is varied.  There is no easy template to follow. However, there are several things you can do to protect yourself, whether you are an employer or an employee.

To protect yourself from the harm of sexual harassment in the workplace, as an employer, you need to ensure that you have a policy that has been reviewed by an attorney. You should ensure that you provide adequate training to employees. You need to ensure that you have adequate and confidential grievance procedures, and you need to ensure you are not a part of the problem. You should also ensure you take consistent and fair action regarding accusations of sexual harassment in the workplace to protect yourself in any potential future suits. Likewise, an employee must report any harassment, follow the grievance procedure outlined, and document any and all instances of harassment. Failure to do so could result in your potentially foregoing claims due to failure to report. Some Seventh Circuit Cases were denied to Plaintiffs (employees who brought suit) because they failed to report close in time to the harassment, which muddied the claim for the Court.

The bottom line is, do not let your workplace be a Sir-Mix-A-Lot song.  Stick up for yourself. Baby Got Back is a song for a bar, not your office, fire station, police department or factory floor.

*The opinions expressed are of the blogger only and we're not intended as legal advice or as an avenue to engage in a lawyer-client relationship.